The Legacy of St. Nicholai Velimirovich 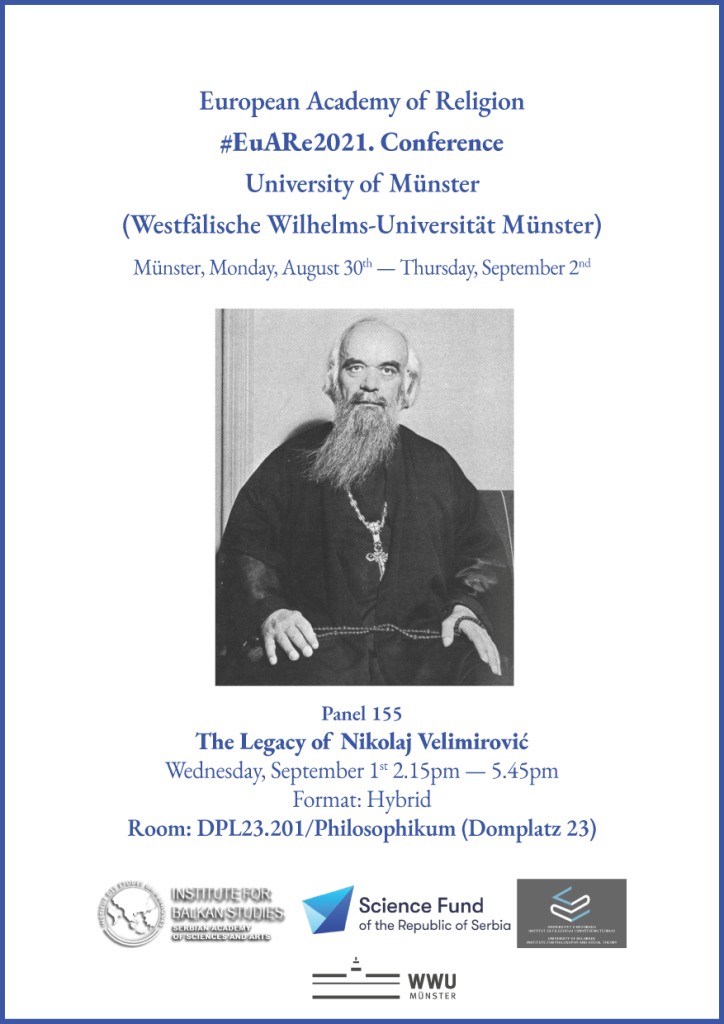 The fourth Annual Conference of the European Academy of Religion took place in Münster (Germany) between Monday, August 30th and Thursday, September 2nd, 2021. University of Münster (Westfälische Wilhelms-Universität Münster) was the organizing institution. This year more than 800 participants from around the world participated in the conference, which contained 163 panels (details are available at the 2021 EuARe conference schedule — at the website of the European Academy of Religion: https://www.europeanacademyofreligion.org/conference-schedule). The keynote lecturers at the conference were Vassilis Saroglou (Université Catholique de Louvain), Guy Stroumsa (Hebrew University of Jerusalem), Judith Wolfe (University of St. Andrews), Azza Karam (Vrije Universiteit in Amsterdam)...

On Wednesday, September 1st, there was the panel dedicated to the St. Bishop Nicholai Velimirovich. Panel 155, with the working title “The Legacy of Nicholai Velimirovich” was held in a hybrid format — as a combination of online presentations and presentations of panelists present in Münster. This panel took place at the Philosophisches Seminar (Domplatz 23, 48143 Münster), and was organized by the Institute for Philosophy and Social Theory of the University of Belgrade and Serbian Academy of Sciences and Arts.

As it was announced before the conference, the panel aimed to scrutinize the intellectual legacy of the modern Orthodox theologian Nicholai Velimirovich (1881–1956). Namely, despite the unanimous recognition of his intellectual and spiritual caliber, Velimirovich remains a largely under-researched author both in a Serbian national and an international context. Moreover, apart from being scantily studied, his writings are usually subject to excessive misinterpretation. This is particularly the case with one of the constants of Velimirovich’s work, namely his criticism of certain European ideas. Perhaps, more than any other aspect of his work, Velimirovich’s views on Europe have been approached in a biased way and instrumentalized in highly charged political disputes.

1) Velimirovich’s formative period before and during WWI, he spent in Germany, Switzerland, UK and USA and his ecumenical endeavors;

2) the interwar period, while he served first as bishop of Žiča and later as bishop of Ohrid, and his relationship with the Yugoslav government and political parties, Roman-Catholic Church, Jewish communities, as well as with the ideologies of fascism and communism;

3) his imprisonment during WWII in Dachau, immigration in the USA, and the life in immigration, including his rectorate at St Tikhon’s Orthodox Seminary in South Canaan (PA) and his engagements with American Christians.

Participants of the panel “The Legacy of Nicholai Velimirovich” were:

Milan Kostrešević (University of Bern, Switzerland): “Nicholai Velimirovich’s Scientific Activity in Bern: Doctorates in Theology and Philosophy” (Kostrešević could not participate but he submitted his paper);

Srećko Petrović (University of Belgrade, Serbia): “A Review of Early Ecumenical Engagement of Nicholai Velimirovich: 1908–1921”; The next issue of the journal is scheduled for the second half of the year. The next issue will be published in English and Serbian.

According to the schedule of the conference, this panel was to be held from 14.15 to 17.45, with a break; however, there was a lot of questions so there was almost no break and there was not enough time for the questions which were raised and discussions which started, so panelists and other participants extended the time to continue the discussion.

This international scientific event was a kind of commemoration and celebration of legacy of St. Bishop Nicholai — on the occasion of the 140th anniversary of St. Nicholai Velimirovich’s birth, 65th anniversary of his repose in the Lord, and 30th anniversary of the transfer of his holy relics to Lelić in Serbia. Hopefully, there will be more events of this kind in the future.